When you received recognition for your US approved patent, and you got your new laptop!!! I’m still thinking of a name for my lappie. Yay! ❤ 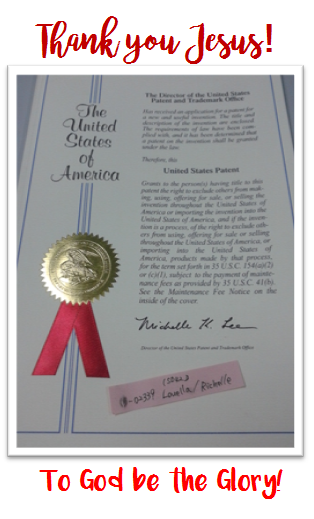 Late last year, my mother was experiencing irregular bleeding. She already had a menopause about 10 years ago. So it’s quite alarming that we decided to consult a doctor last February. So about a month ago, we had a cancer scare when the doctor said that it could possibly be a cancer.

I didn’t write about it or speak about it to many people because somewhat, talking about it makes it real. I was trying to deny it until I realized that I need the prayers of my friends to help us get through it when the worst happens.

My friends and SFC family were my prayer warriors. With God’s grace, the test results all come negative contrary to what the doctor initially assessed. The bleeding was gone after some medication. Indeed, prayers move mountains.

I am so grateful to all the people who’ve prayed for my mother. Just a day after I asked my SFC household to pray for her, the first result come out negative. A week after that, my mother underwent a minor surgery, and the doctor said that based on her observation, the tissues she got for the biopsy test is not cancer-looking. We are yet to get the biopsy results but I am confident that with God’s grace, the conclusive results will be negative.

I found a note somewhere in my files written last August 13. And it was another touch of God’s love. The note says:

“I woke up today with a text message from my mother bearing a not so good news. Having been woken up with a mind that is still groggy from lack of sleep, and without realizing yet how blessed I am to still have my two eyes open to the wonders of today, I created a reply for my mother. The content of the text I created wasn’t grace-bearing. It implied my annoyance to that news. But before I could send that text, some angel may have whispered in my ears to call my mother instead. So we talked about it. I told her how sorry I am for the helplessness of the situation. I can’t even begin to think how I am supposed to help. But mama, with her ever endless understanding told me not to worry about it… that they were alright.

So we talked about other things, and somehow everything seemed alright.
We parted with her saying that I should go home this weekend. I intend to and I realize how blessed I am that I have started my day talking to my mother. For some who see their family every day, who talk to them regularly, that experience may have not been considered a blessing. But I consider it one. I realized that hearing my mother is one of God’s ways to remind me that I am loved. I guess I just missed them.”

Normally, when I have the time of the month for the first day, I can’t go to the office without the aid of Ibuprofen. Unfortunately today, I don’t have a supply. But. I was able to come here! The pain did not go away. I was only aided by God’s strength, which I fervently asked when I realized my lack of Ibuprofen. And until now, the 2 Advils I got from the clinic are lying on my desk as I say, “No, I don’t need you.” 😉

When I am affirmed that not being able to answer every question about Christ doesn’t make me less of a Christian… That some things we can be taught about, some things we can learn from books, but there are things that we just have to see and feel.

St. Augustine had said it better: “Understanding is the reward of faith. Therefore, seek not to understand that you may believe, but believe that you may understand.”

When I was woken up by my 1-year-old nephew singing his adorable version of watermelon… Then for a very long time, I had breakfast with the majority of the family reminding me again about how they are God’s masterpiece to me.

When you don’t have your wallet with you, but you know that you’ll be okay for the day because you have friends who can “adopt” you and shoulder the expenses of your food so you’ll live through the day. (Bayran ra ta mo friends)

My uniform’s still wet when I woke up. I have to iron it twice and expose it to the electric fan to make it dry or at least bearable to wear. Wearing a not-entirely-dry uniform is not a comfortable feeling. 😦 And then when I ride the jeepney for work, I realized that my wallet is not in my bag. (I can’t be sure where it is even now. :/) Just when I was telling myself that this is quite a day already, I saw my cousin waiting for me, with a bag she brought for me! I also received MMK text messages from her affirming me of the importance of the work that I do for the Lord and for the family.

These little reminders that far outweigh my worries and doubts. This God’s awesome love. 🙂

When you talked to a person whose profession you aspire. 😀